In the 1985 Topps Traded set, there were two Reds cards: Tom Browning and Alan Knicely. Browning was the highlight for the Cincinnati fans, as he had just won 20 games as a rookie pitcher…a rare feat. But there were other players traded to the Reds during the season, and other rookies that could have made an appearance in the set. Over the next few days I will highlight a few of those “cards that never were,” starting with third-baseman Buddy Bell: 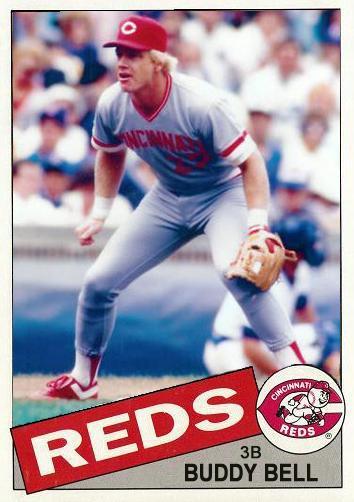 Buddy Bell was a very good player for the Cleveland Indians and Texas Rangers, but more importantly to Reds fans, he was the son of a former popular Reds player, Gus Bell. So when this transaction was announced, the city was excited.

Buddy only lasted in Cincy a couple of years, losing his job in 1988 to eventual Rookie of the Year Chris Sabo. Bell was traded to the Astros and never was able to get back on track. There are some who believed he may have had an outside shot at the Hall of Fame if he had not been sidelined by injuries late in his career, as he fell less than 500 hits shy of the magical 3000 mark.