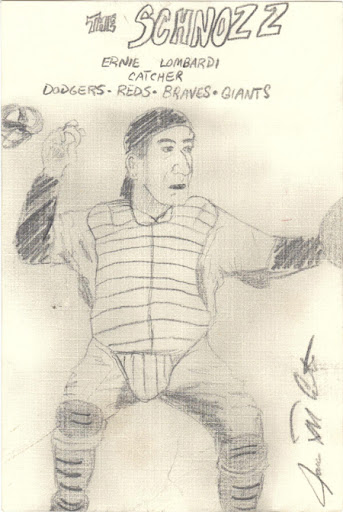 1986 Hall of Fame inductee Ernie Lombardi was somewhat of an obsession of mine in the late 80s/early 90s. How could a guy be so good, but be kept out of the Hall of Fame for so long? He wasn’t inducted until 1986, but his last game was in 1947!

This was actually drawn on a small piece of paper, not an index card like most of my sketches. There was no Photoshop touch-up, this is a straight scan.

If you happen to enjoy looking at black-and-white sketches of Hall of Famers, check out Every Hall of Famer by Summer Anne Burton. She is posting her sketches in order of induction, and is currently up to 1953.